History of our Friendship

Initial contact between the two communities occurred in 1965 with a visit by Côr Meibion Pontypridd to visit a choir called called “Liederkranz” based in the Oberensingen area of Nürtingen.

The Liederkranz returned the visit to Pontypridd one year later.

On the occasion of the next visit of Côr Meibion to Nürtingen the partnership between the two communities was formally established – on 26 July 1968.

Since then reciprocal visits between the two choirs has taken place on a regular basis. Firm friendships have been established. As one member of Côr Meibion put it, “We don’t think of them as friends, we think of them as family.”

It was as a result of this successful partnership that Pontypridd Urban District Council decided to have a formal Twinning link at a civic level and to join in partnership with Nürtingen. In July 1968 an Agreement was signed by John Cheesman J.P. mayor of Pontypridd and Karl Gonser mayor of Nürtingen.

This resulted in the first twinning link in Rhondda Cynon Taf and is proud to boast the longest established twinning links with Nürtingen.

Nürtingen is a city in Baden-Württemberg, in the district of Esslingen. It has a population of over 40,000 people and is a state of the Federal Republic of Germany in the South Western part of the country to the east of the Upper Rhine River. 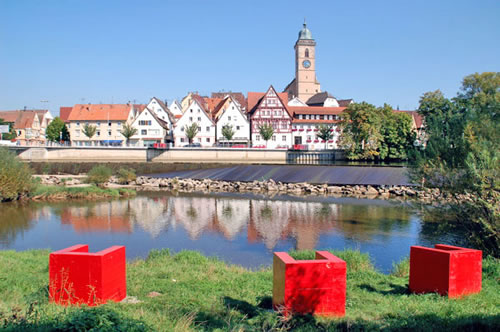 The City is located on the river Neckar, 291m above sea level.

Many people living in Nürtingen work in Stuttgart, although the town itself has a significant amount of industry – mainly the manufacture of machines and tools.

Nürtingen’s principle historical significance is its association with the poet Friedrich Hölderlin (1770 – 1843) who lived in the town from 1774 to 1805.

Nürtingen is very active in the area of twinning. In addition to its partnership with Taff-Ely, it is twinned with Ouillins near Lyons in France and the Hungarian city of Soroksár.

35th Anniversary of our Friendship with Liederkranz Oberensingen

On the occasion of the 35th anniversary of the association between Côr Meibion Pontypridd and the Liederkranz singers in Nürtingen-Oberensingen the choir spent one week in Nürtingen. 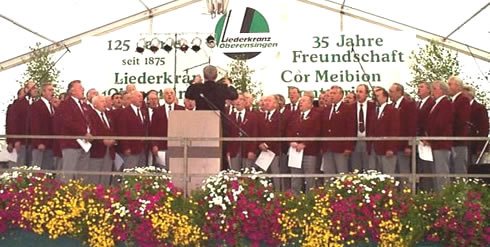 Their program included one formal concert and several appearances on the stage of the “Festzelt”, a large tent erected on the edge of the town, with beer, wurst and a lively program of entertainment by local bands and choirs.